It is that time of the year again. The Flu. Every year there is always a flu outbreak. And each year the public are vaccinated because they ‘think’ their life depends on it.

“We strongly encourage people to get vaccinated, and we’d like them to do that as soon as possible,” Jhung told Reuters, adding that the “current batch of flu vaccines appear to be a good match for this year’s flu.” -Dr. Michael Jhung, a CDC flu expert.

This flu outbreak of 2013 is the worst since 2009 and earliest in a decade. Have you ever wondered if the vaccines could be the culprit?

According to the CDC,

The following is the flu map for the week of January 26, 2013. The brown is widespread, meaning, more than half the population of that particular state have been infected. The death toll for this year has risen to the hundreds and hospitals are over-flooded! 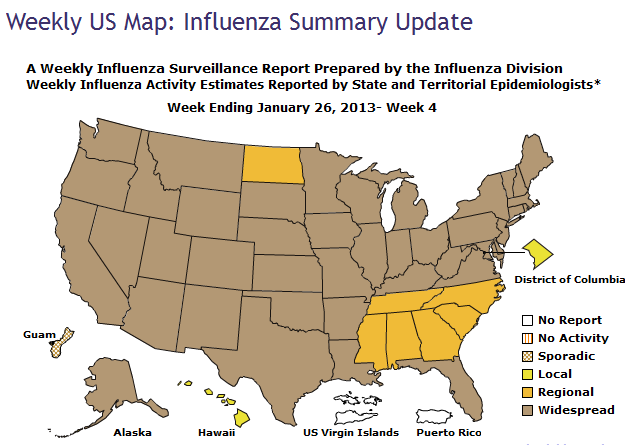 What exactly are in these vaccines?

–Gelatin (According to Rabbi Abraham Adler this pork gelatin is Kosher, but Islamic leaders believe it to be unpure.)

–Human Serum Albumin (which comes from monkey, chicken and even aborted baby fetuses)

–Live Virus sometimes dead virus, depending on the vaccine.

Do you really trust the live viruses added into these vaccines? Humans can currently only catch H5N1 from infected birds and when they do it is usually fatal. According to the DailyMail , “two teams independently discovered how to mutate the virus (H5N1) so that it could be transmitted through the air between humans.” Who knows what else they have been doing with these viruses. Why would they want to genetically modify the fatal H5N1 virus so that it is transmitted from human to human? Population Control! When the H5N1 virus is transmittable from human to human, we know who is to blame.

Regardless if you ‘think’ you need a vaccine or not, do you think Yahuwah would want your body, your blood stream, the Temple of Yahuwah full of such unpure abominable ingredients?

You don’t NEED a vaccine for immunity of the seasonal flu, or any sickness. Keeping your immune system in track and taking special precautions can protect you and your family.

When going out, sanitize the shopping cart, avoid coughers, stay away from sick people, bring a scarf and wrap your face, hold your breathe if someone near you sounds questionable. Keep a window open a crack for fresh air. Wear your winter gloves. Winter is actually the most disguising way to avoid germs in the air and on contact (make sure to wash your gloves frequently!). The average person will think nothing of it if you are wearing your scarf and gloves in the store. We go into the stores with our gloves and scarf still on. If you would have seen Brother Danny McGuire last winter when the only thing the grocery store had was hand sanitizer one day, (they were out of the sanitizing wipes) you would have cracked up! We sure did overlooking him in the window from our truck outside. He squeezed a puddle of hand-sanitizer into the palm of his hands and swooshed it all over the cart handle!  We don’t let the opportunity of a sickness come our way.

HOW DO YOU PREVENT FROM GETTING SICK DURING FLU SEASON?

6 Responses to Deadly Flu Virus Sweeps Across the Nation