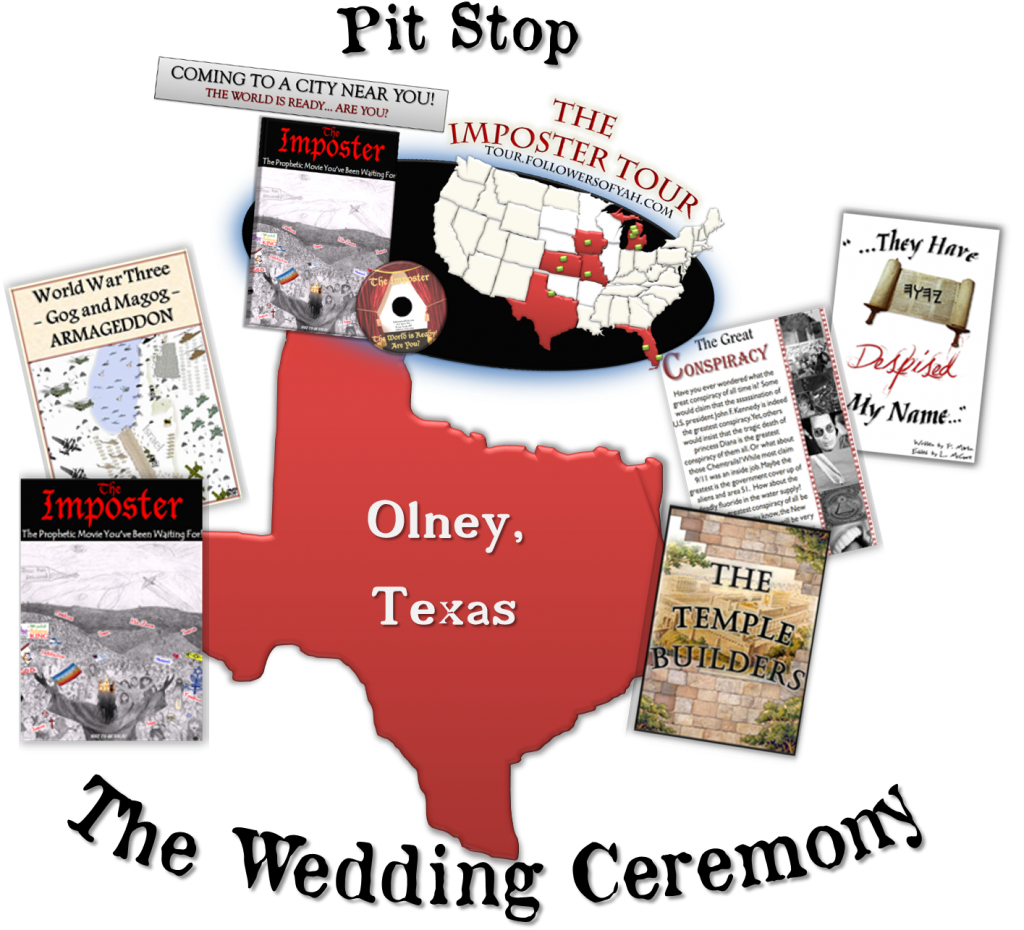 With all the excitement of meeting and seeing new faces on our tour from state to state, the long road can become extremely lonely. Therefore, we here at the FOY ministry greatly enjoy a pit-stop every now and then. Our recent pit-stop would have us travel nearly 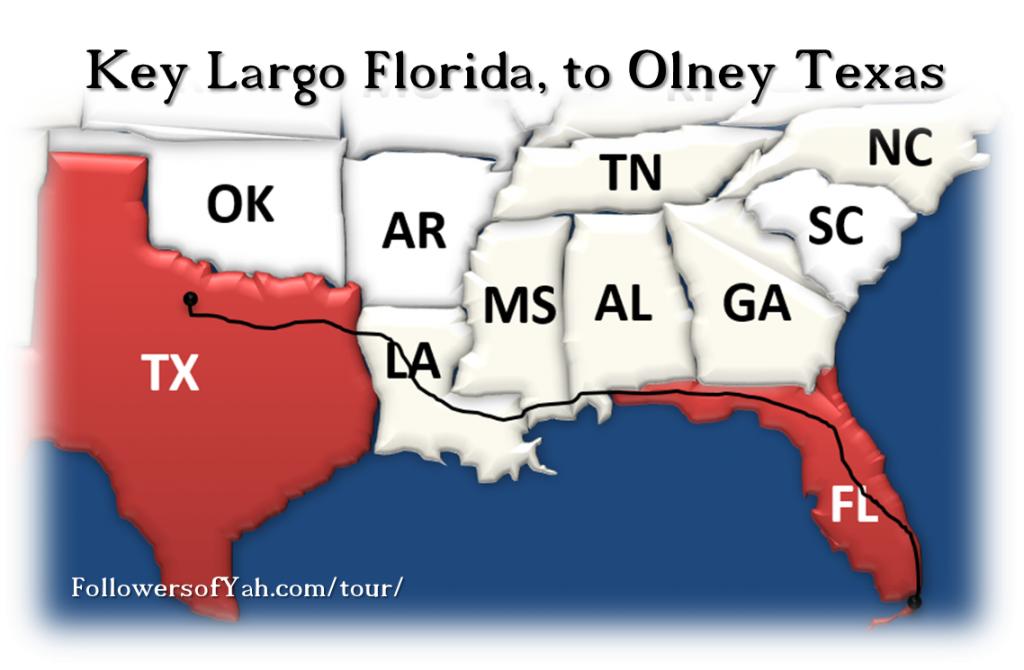 1,600 miles from Key Largo, Florida to Olney, Texas for a very special wedding. Leaving Key Largo meant we had to embrace the bitter cold arctic blast that the majority of states had been experiencing for weeks. As difficult as it was to trade in our flip flop’s, sun hats and lemonade sipping drinks for a wardrobe of ear muffs, gloves and winter coats, the tradeoff would be well worth it. Nothing compares to visiting old friends and making new ones.

All weddings are emotional in one way or another. But when Torah believing Messianic’s desire to wed and have their parent’s blessings, the entire ceremony is awesome. What makes our weddings so different, you ask?

Most of the customs surrounding the Messianic wedding has deep rooted spiritual meaning. The entire ceremony is quite fascinating actually. Here let me explain. Shot gun weddings do not exist within the Body of Mashiach neither does ‘justice of the peace’ ones. According to our tradition, marriage is viewed as a contract declared by Yahuwah between the man and woman. The goal is to create a lifelong relationship with

Yahuwah as the center. This is different compared to those that are living within the Babylon system. The majority of them have allowed the ‘state’ to be their center. Once the state has been made a partner, by the signing of a marriage license, they then have legal rights to anything that the partnership produces; such as children.  Most of these marriages also do not acknowledge the importance of the parent’s blessings. Whereas, within our tradition, that is the first step in the marriage ceremony.

When a man is interested in a woman, he first prays and may even fast to see if she is his helpmate. After receiving confirmation he then goes to the young woman’s Father to ask for her hand in marriage.  If there is no blessing from the Father then there is no Betrothal and the story ends. However, in the event her Father agrees… the journey begins.

The next step is the acceptance, if the woman wants to be his bride or not. After all, she will be spending the rest of her life with him. According to tradition, in front of witnesses, the man pours some wine or grape juice into a cup.

He then patiently waits to see if she will drink from it. If she accepted the marriage proposal she would drink from the cup. Their betrothed would now begin. Some betrothals can last as long as a year. The betrothal is binding and can only be broken through written divorce. The only way the betrothal could be broken by divorce is if the bride is found not a virgin.

The happy Bridegroom would then give her some object of value such as a ring, necklace or bracelet along with a Ketubah (marriage contract/covenant) listing promises to the Bride from the Bridegroom.

He would then leave to go prepare a suitable place for them to live. He tells her, “I go and prepare a place for you and when I am ready I will return for you”. During his departure the Bride begins to get matters ready.  The custom was that the Bridegroom could not return to his beloved until after he had his Father’s approval of the place he had prepared for her. In the event the Bridegroom was asked about when the wedding would be, he would declare, “only my Father knows!’

Hmmmm….are you beginning to see the importance of the wedding ceremony? I sure hope so. Let’s continue:

The wedding could not take place until after the Bridegroom’s Father declared, ‘The wedding chamber is now ready! Go forth and get your Bride!”

Since the Bride never knew which day or hour her Bridegroom would come get her, she would have to keep herself ready at all times. She kept a lamp lit while the bridesmaids kept oil on hand. Patiently, they would wait to hear for the sound of the Shofar. At the blast of the Shofar they knew the Bridegroom is coming to her!

After the wedding party arrives, the Bride and Groom goes into the wedding chamber. The best man or friend would wait outside to hear that the marriage had indeed been consummated. The stained blood bed sheets bore witness that this was her first sexual intercourse. This proved of her purity. The entire marriage feast lasted seven days with a marriage supper full of guests.

Let us now put on our spiritual-glasses to see the deeper richer meaning found within the Marriage Ceremony.

During the Tanak (Old Testament) Yahuwah made a marriage covenant with His people (YeshaYahu/Isaiah 54:5-6). The Torah is the written marriage contract (Shemoth/Exodus 20:3) in other words our marriage vows. This contract was a blood covenant (Wayyiqra/Leviticus 17:11) with the Bride price consisting of the Passover Lamb (Shemoth/Exodus 12:13-14). The drinking of the cup of wine during the Passover meal was the sign of the woman (Bride/Yisrael) accepting the proposal and was publically announced in the wilderness (Shemoth/Exodus 19:7-8). The weekly Seventh Day Sabbath was the wedding chamber of how the children of Yisrael would spend time with their Yahuwah (Shemoth/Exodus 31:16; Wayyiqra/Leviticus 19:30; 23:3).

Sadly, the children of Yisrael broke the marriage vows (Torah) and thus were found whoring by serving false deities. Therefore, the marriage ended in a writ of divorcement (YirmeYahu/Jeremiah 3:8) as Yahuwah had to put her away for a time (Yehezqel/Ezekiel 16:60-63; YirmeYahu/Jeremiah 31:31-34). Yet He loved her so much that where there seemed to be no way… He made the way:

Let us now connect these customs to Yahuwah’s magnificent plan for humanity as outlined within the marriage ceremony.  Whenever a Yisra’elite man (Yahushua the Messiah) wanted to marry (the congregation), he would go to the maiden’s house with a ‘bride price’ (Yahushua gave his life for the Bride and thus was the Passover Lamb).

“On the next day Yoḥanan saw Yahushua coming toward him, and said, “See, the Lamb of Elohim who takes away the sin of the world!” Yohanan/John 1:29

He was declaring that Yahushua is the bride’s price. Yahuwah approved and accepted the ‘bride price’ as “He was pleased to crush Him“. (YeshaYahu/Isaiah 53:10).

If the bride price was accepted, a glass of wine would be poured (MattithYahu/Matthew 26:26-29). If the maiden drank, then they would be betrothed. The only way the betrothal could be broken was by divorce/ if the bride was found to be not a virgin (MattithYahu 1:18-19).Then the Bridegroom (Yahushua) would go off to build a place (the Millennium, New Jerusalem as outlined in Revelation 21) for His bride (Believers). Now let us consider the following verse:

Praise be to Yahuwah! Amazing! At that time, His taught ones did not understand what He was saying:

“T’oma/Thomas said to Him, “Master, we do not know where You are going, and how are we able to know the way?” Yohannan (John) 14:5

The Messiah was saying, that He was going to prepare a place for us! When the Father (Yahuwah) decides the marriage chamber (New Jerusalem) is indeed ready (Mark 13:32) as it was custom for the groom’s father to do, the Bridegroom (Yahushua) will come get the Bride (us Believers). The Bride (Believers) must prepare themselves to receive our Bridegroom, Yahushua (Revelation 19:7-8) as the parable of the ten virgins explains (MattithYahu/Matthew 25). This is why no man knows the day or the hour, like a thief in the night!

Are you waiting for the Bridegroom, Yahushua to come get you? Fill up the oil lamps! I say, let the Bride prepare herself, for when the hour does indeed come, she shall be ready! 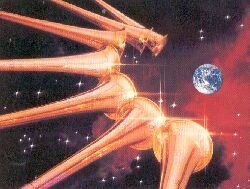 At the seventh trump our Bridegroom, Yahushua will come get us Believers and then the doors shall be shut and the marriage feast of the Lamb will begin (Revelation 19:19). All those who have been faithful by keeping the marriage vows, (Ten Commandments) believers (the Bride) to the Bridegroom (Yahushua, Ha Mashiach) will enter into the wedding feast!

Clearly, these traditions or customs are just important today as they were generations ago. We are now the Bride of Messiah and can learn so much from the deeper meaning of these practices.

Considering all this, the FOY ministry was very happy to rejoice along with being witnesses in our dear friend’s wedding.

We were blessed with safe travels to go to the wedding of Jasey Davis and Carson Hughes. It was a beautiful wedding. We met lots of new friends, had great fellowship and a lot of fun. We also got to share our Ministry and the story of our Miracle Maiden, Felicia with our new friends. Here are some pictures of the wedding. 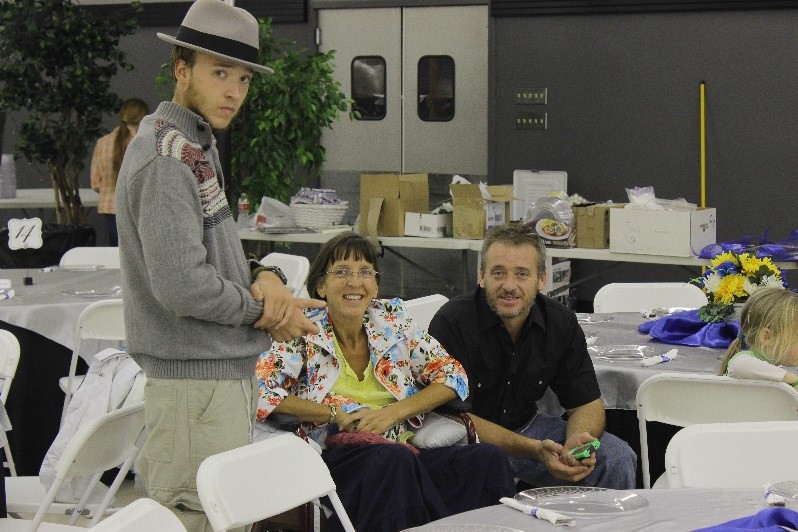 (left to right) Brother Michael, Sister Linda and Brother Danny the day before the wedding during setup. 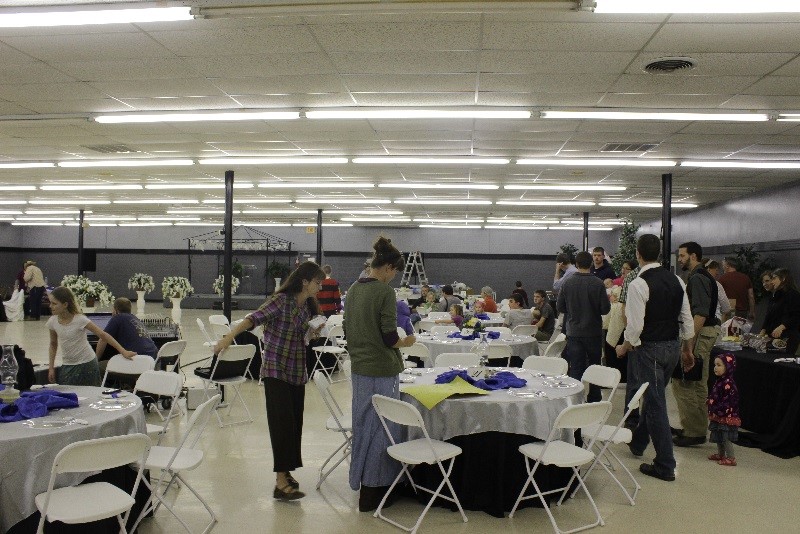 Mother-of-the-Bride, Jan Davis and Felicia setting up the names on the tables of who sits where. 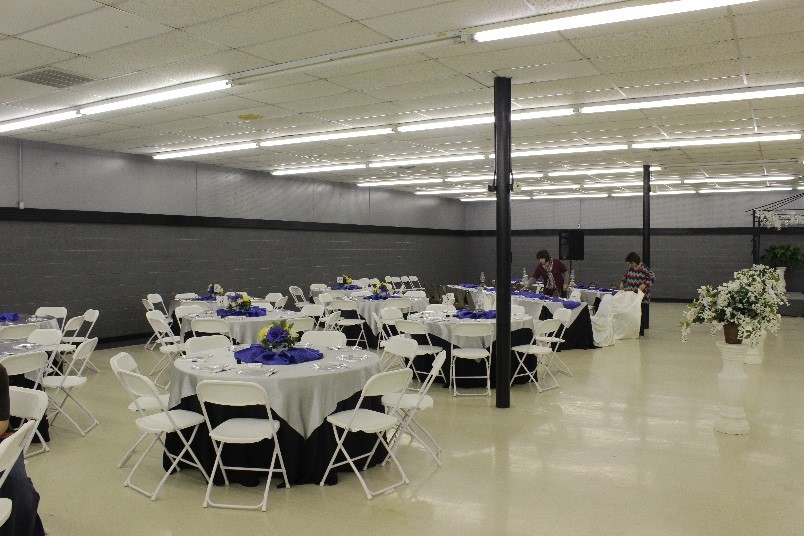 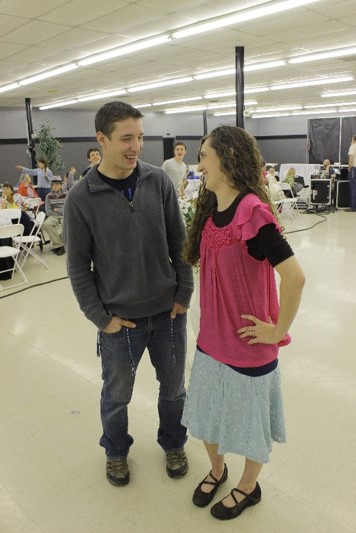 Carson Hughes and Jasey Davis.
(The soon-to-be newly-weds)
“Are you ready for rehearsal”? 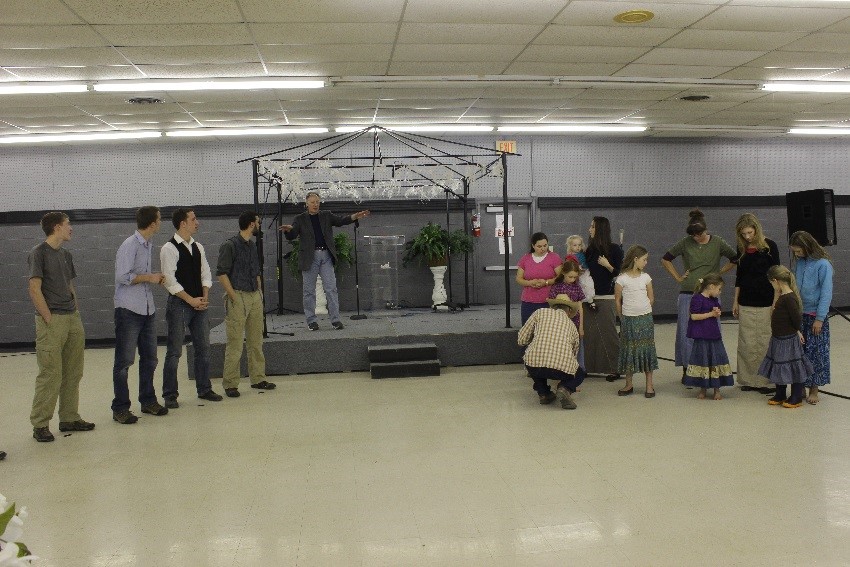 The Wedding Rehearsal, taping where everyone is to stand during the wedding. 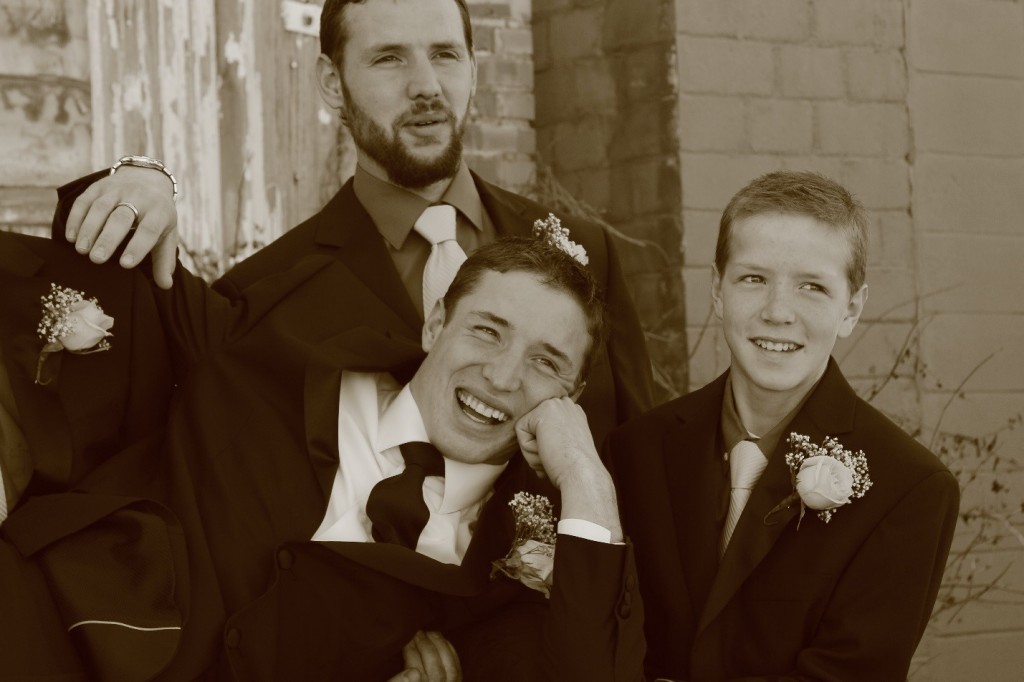 The groom being held by all his groomsmen. 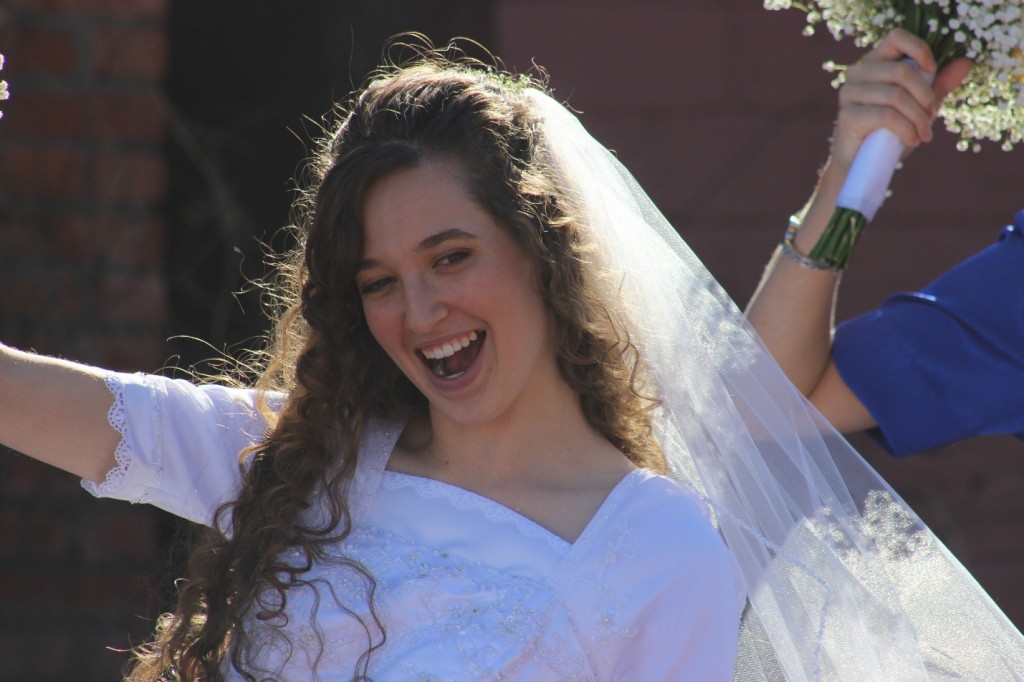 The beautiful Bride, Jasey Davis, during the photo shoot. 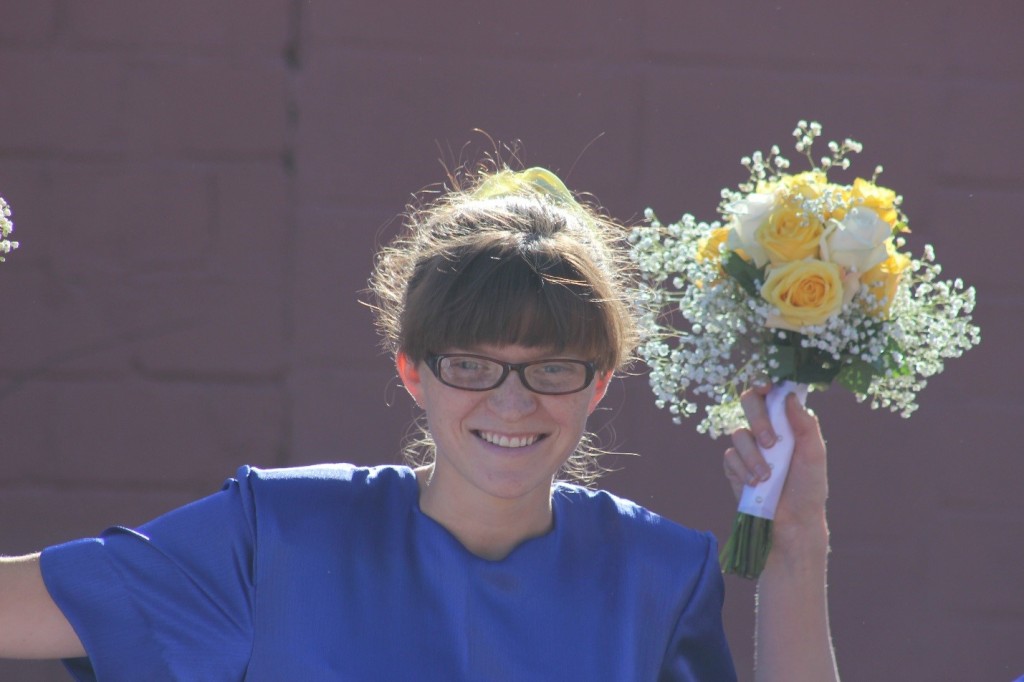 Sister Felicia, one of the Bride’s Maids for the wedding. 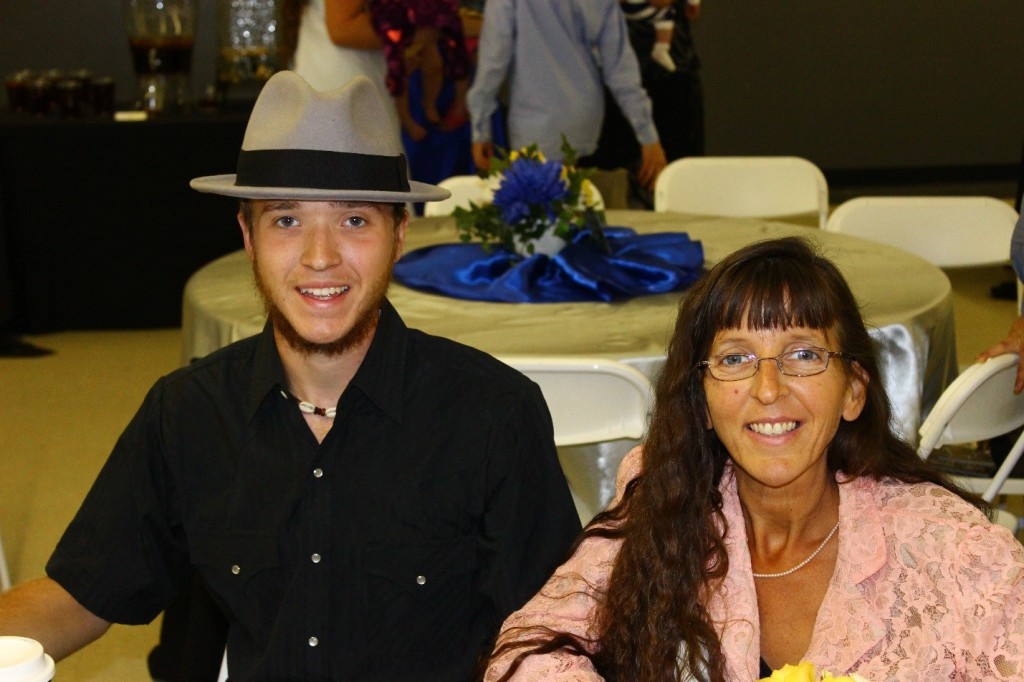 (right to left) Brother Michael and Sister Linda. The day of the wedding. So excited! 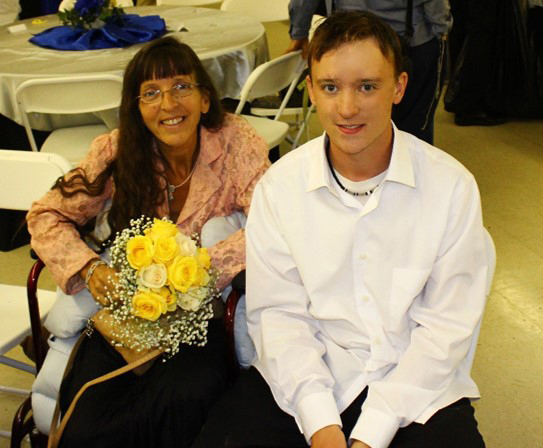 The Groom walking the Mother-of-the-Bride, Jan Davis, down the isle for the wedding ceremony. 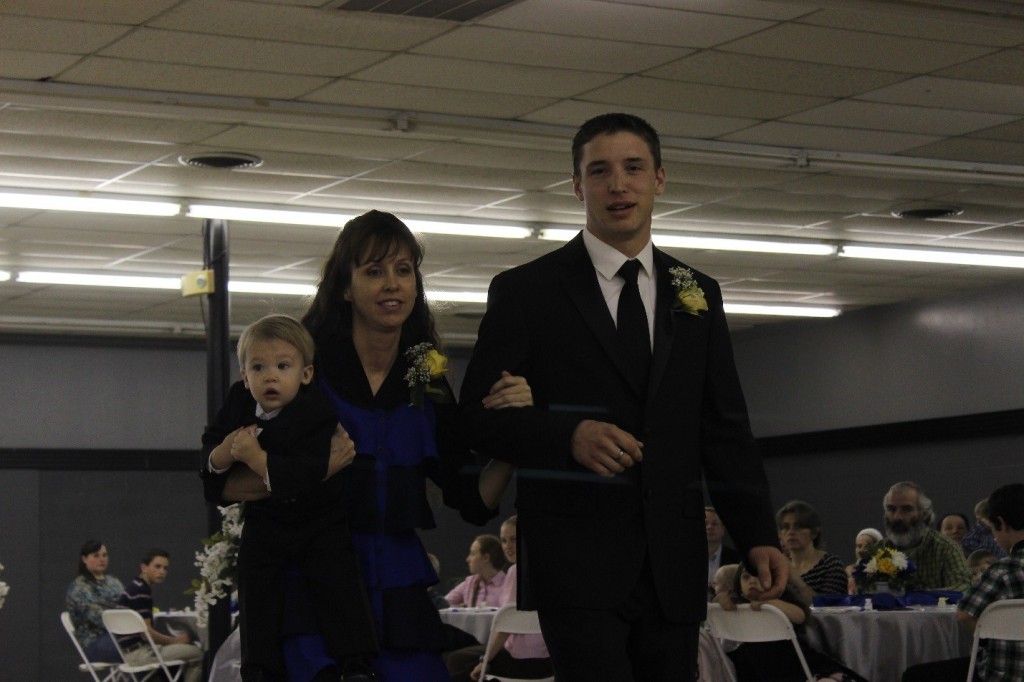 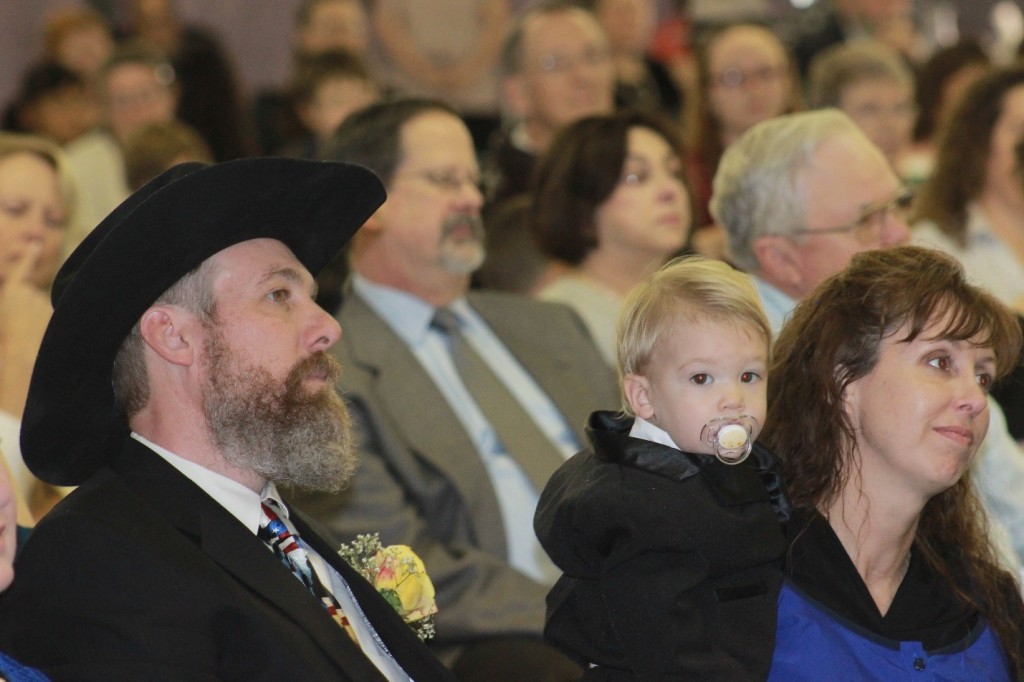 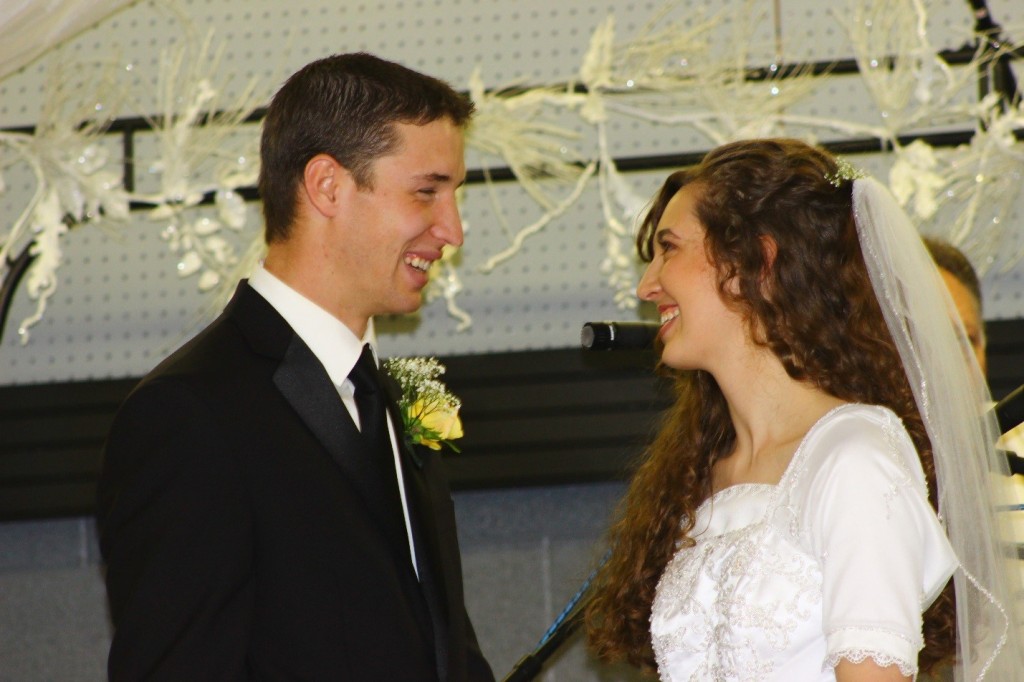 Exchanging the wedding Vows under the Huppah. 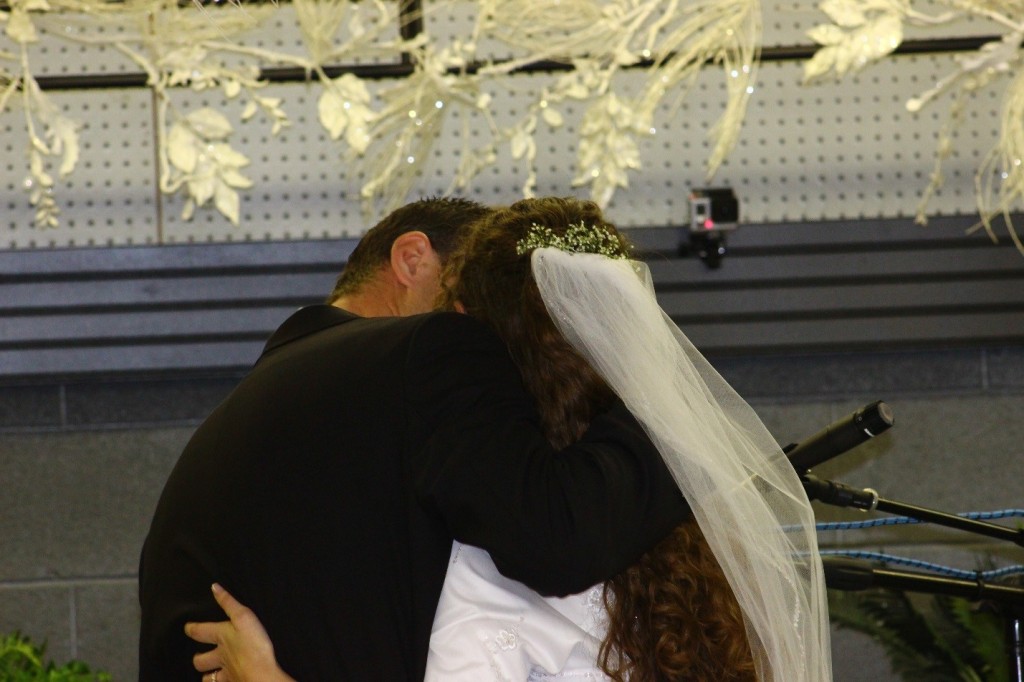 “You may now kiss the bride.” 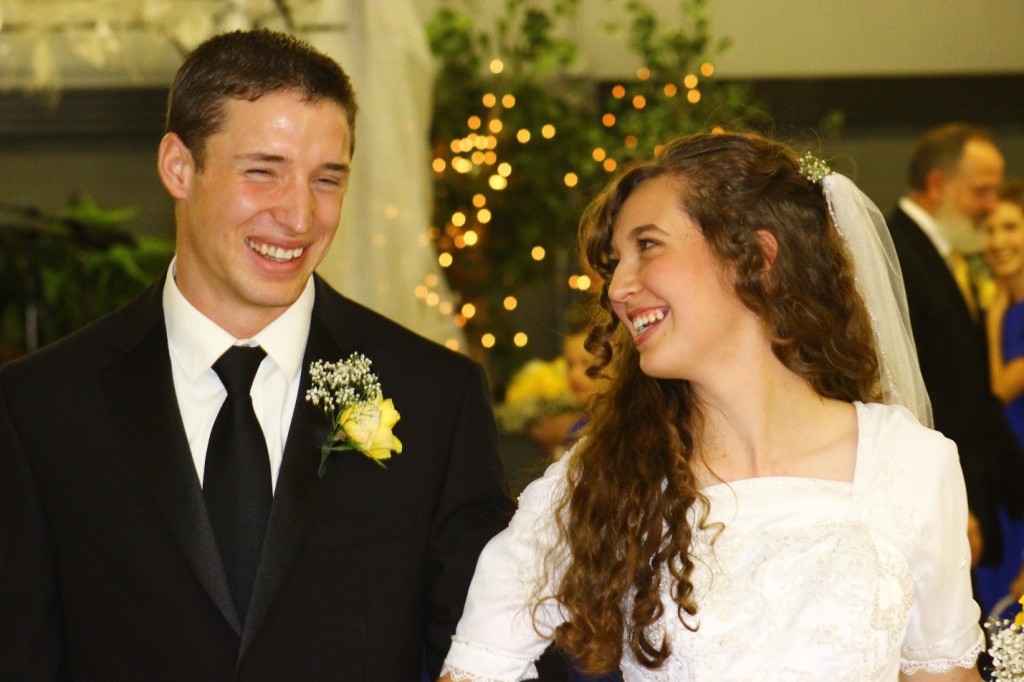 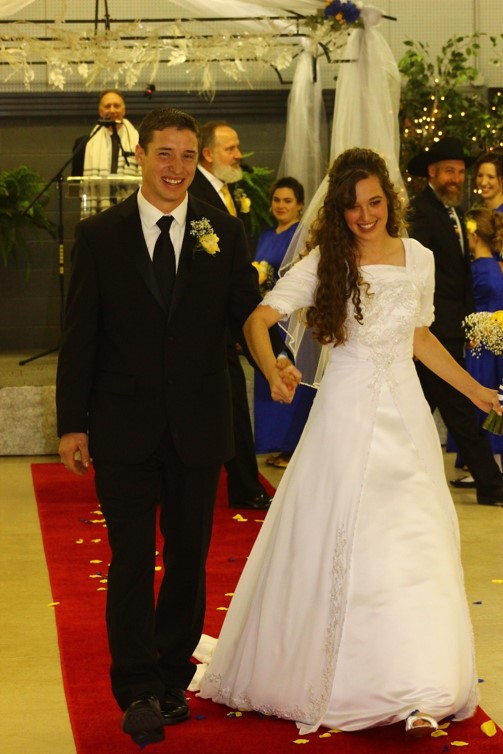 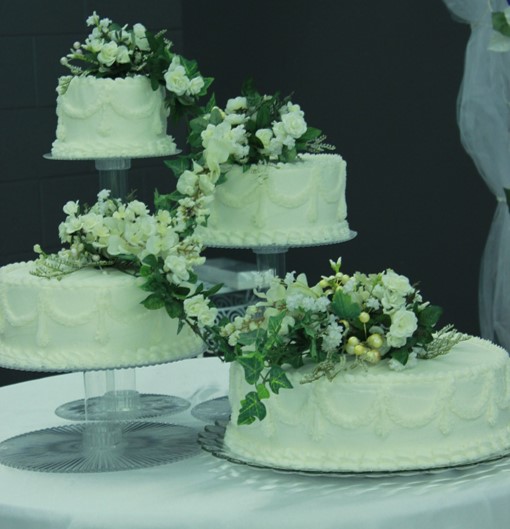 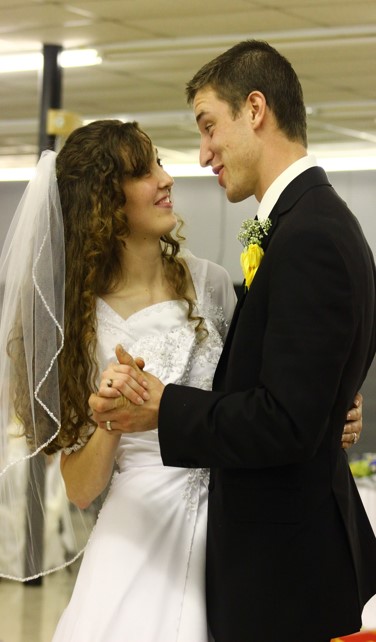 Do you want to learn more about Yahuwah’s Feast Days and the spiritual meaning behind them? Read our book online, “The Feast Days of Leviticus Chapter 23”