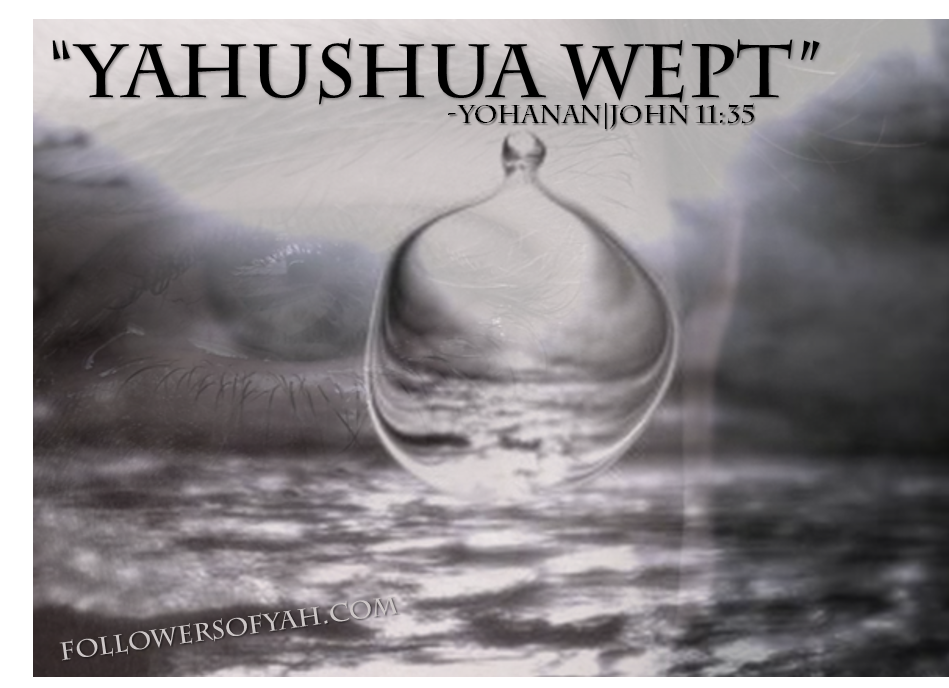 Known as the shortest verse throughout all of Scriptures. Yet we learn how Yahushua has a tender, gentle, loving warmness to Him. Here moved by a deep passion, tears fell from our Master’s eyes! Two times in Scriptures Yahushua wept openly that has been recorded. The above verse Yahushua wept over the sorrow of his friends at the death of Lazarus.
The other time when Yahushua wept can be found in the book of Luke: 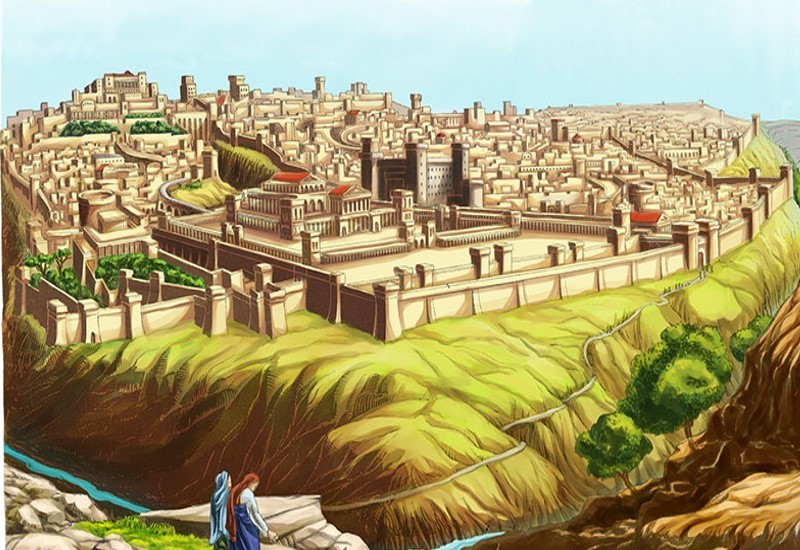 “And as He came near, He saw the city and wept over it, “If you only knew even today, the matters for your peace! But now they are hidden from your eyes. Because days shall come upon you when your enemies shall build a rampart around you, and surround you and press you on all sides, and dash you to the ground, and your children within you. And they shall not leave in you one stone upon another, because you did not know the time of your visitation.” –Luke 19:41-44

Clearly we see Yahushua wept over His enemies! The very ones that rejected Him. He still showed great grief knowing the terror that would befall the disobedient and rebellious people of Jerusalem. He knew that they were going to suffer greatly and deal with wrath as a direct consequence of their disobedience (MattithYahu/Matthew 23:31-36).

There is no doubt in my mind, with the recent disturbing current events that have transpired, Yahushua would be weeping today also! I believe He would weep for the same two reasons as He did back then. One for His friends the other over His enemies. First let us look at His friends.

“A land as dark as darkness itself, as the shadow of death, without any order, whose light is as darkness.” –Job 10:22

Any nation that murders the innocent, especially as they are being brought forth is a very, v-e-r-y dark land indeed. How shocking and quite disturbing to find out that the demonic Planned Parenthood has been selling baby parts. They have even sold intact baby body parts through partial-birth abortions:

Is that not disturbing? Is that not barbaric? Is this no different than what the Ammorites did to the pregnant women (Amos 1:13) in Gilead?

Planned Parenthood has picked up where Hitler left off. 56,993,299 babies have been brutally destroyed since abortion was made legal in January, 1973. Every day the United States performs the vicious act of murdering 2,900 children. That is 137 abortions per hour and 2.3 per minute.  By the time you have gotten this far into the article, try to imagine how many children have been murdered. You do the math.

There is no doubt in my mind that Yahushua would weep for these innocent helpless victims! Yet according to the federal law if someone is caught selling or purchasing human fetal tissue they can face up to 10 years in prison with a fine up to 500,000. That don’t stop the you know who’s though. The following reports that the Obama Administration may have possibly purchased these baby parts from biotech for fetal tissue. Maybe that is why any bill to de-fund Planned Parenthood would be a veto? And why a Judge has banned the rest of the video footage from being made public.

After all, selling aborted babies is illegal. That is criminal activity going against the Constitution. A Life at Conception Act declares unborn children ‘persons’ as defined by the 14th Amendment eligible for legal protection. Where is the justice for the unborn? 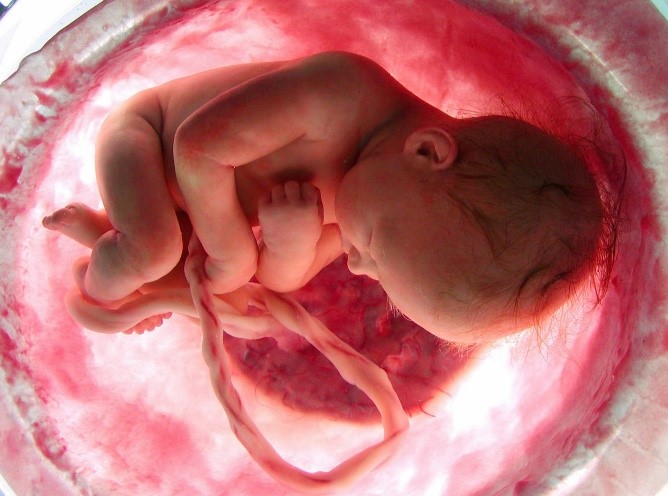 The fetal tissue being sold are aborted babies between 14 and 22 weeks old. These helpless victims are being viciously murdered. So how much is a tiny fetal liver going for these days?  Or what about a fetal thymus? Each are being sold for a whopping $340.00! Also up for sale is spinal cord $325.00, reproductive organ $550.00, a little baby brain is going for $999.00 along with hands, feet, heart, other organs, tissues and limbs. Dr. Jones said he can make $2,500 on a single fetus.

As the one video states Planned Parenthood is selling everything! One company is actually wanting to purchase 120 fetal cadaver specimens. The reason, to humanize mice. These Dr. Frankendevils want to put baby brains into lab mice!!!!!!! This has been mentioned in our December 2012 Newsletter!

These baby body parts are not just for medical research but used in cosmetics and in food: 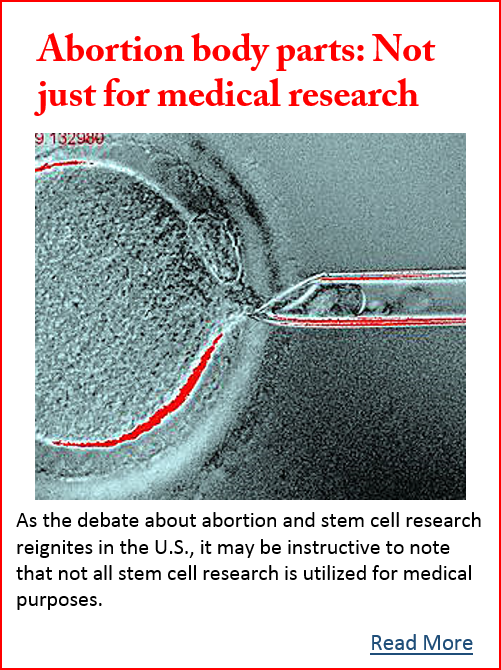 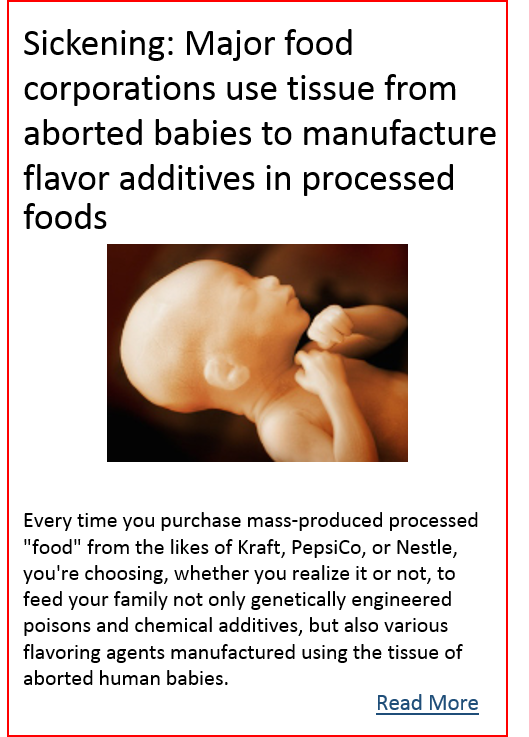 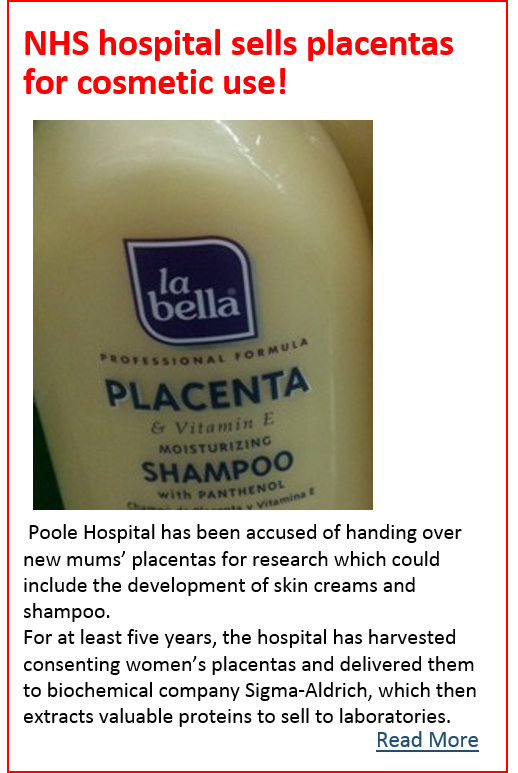 This is so disturbing that personally I could not watch all those videos nor could I finish reading the articles. To me this is beyond horrific! This land indeed cries out with the blameless blood (Gen 4:10) of the multi-millions of children that have been murdered from the womb by wicked, evil, heartless doctors! 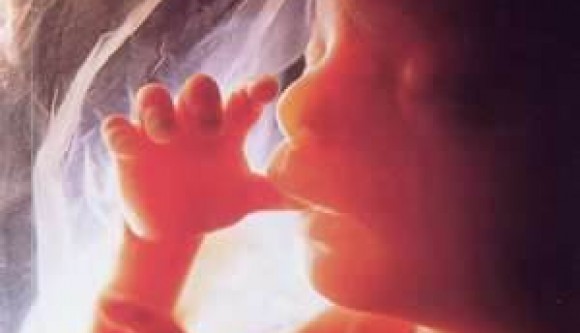 Scriptures tell us that the fetus inside the womb is indeed a human child and has a relationship with Yahuwah. Life begins in the womb:

“Skin and flesh you put on me, and wove me with bones and sinews.”(Job 10:11), “Did not He who made me in the womb make him? And did not One fashion us in the womb? (Job 31:15). “For You, You possessed my kidneys, You have covered me in my mother’s womb.” (Psalm 139:13). “Before I formed you in the belly I knew you, and before you came out of the womb I did set you apart I appointed you a prophet to nations.”(Jer 1:5). Because I was not slain from the womb, so that my mother should have been my grave and her womb forever great.”
–YirmeYahu/Jeremiah 20:17

“And it came to be, when Elisheḇa heard the greeting of Miryam that the baby leaped in her womb. And Elisheḇa was filled with the Set-apart Spirit, and called out with a loud voice and said, “Blessed are you among women, and blessed is the fruit of your womb!  “And who am I, that the mother of my Master should come to me? “For look, when the sound of your greeting came to my ears, the baby in my womb leaped for joy.
–Luke 1:41-44

“For he shall be great before Yahuwah, and shall drink no wine and strong drink at all. And he shall be filled with the Set-apart Spirit, even from his mother’s womb.”
-Luke 1:15

The Scriptures are very clear on the value of an unborn child. He told us that, “before I formed you in the womb I knew you, before you were born I set you apart (YirmeYahu/Jeremiah 1:5).”

We are also told that “before I was born, Yahuwah chosen me to be His (Galatians 1:15).”

Actually Yahuwah values the unborn child so much that according to the law if an unborn child is in the womb gets hurt or dies there is justice for that unborn child:

“And when men strive and they shall smite a pregnant woman, and her children come out, yet there is no injury, he shall certainly be punished accordingly as the woman’s husband lays upon him. And he shall give through the judges. “But if there is injury, then you shall give life for life, eye for eye, tooth for tooth, hand for hand, foot for foot, burn for burn, wound for wound, lash for lash.” –Shemoth/Exodus 21:25

Here He is giving equal protection to the helpless unborn child. We have also been told that children are a blessing, a gift from Yahuwah:

“Look, children are an inheritance from Yahuwah, the fruit of the womb is the reward.”-Tehillim/Psalm 127:3

Yahushua also loved and enjoyed being around the little children. He actually compared them to the Kingdom:

“Then young children were brought to Him to lay His hands on them and pray, and the taught ones rebuked them. But Yahushua said, “Allow the young children and do not stop them from coming to Me, for such is the reign of the heavens. “ -MattithYahu/Matthew 19:13-14

“And they were bringing little children for Him to touch them, but the taught ones were rebuking those who were bringing them. And when Yahushua saw it, He was much displeased and said to them, “Let the little children come to Me, and do not forbid them, for of such is the reign of Elohim. “Truly, I say to you, whoever does not receive the reign of Elohim as a little child, shall certainly not enter into it.” And taking them up in His arms, laying His hands on them, He blessed them.” –Mark 10:13-16

Clearly, Yahushua loved the children including the ones that have not been given the opportunity to freely live! If someone caused a little one to stumble, Yahushua said the following:

“It would be better for him if a millstone is put around his neck, and he were thrown into the sea, than that he should cause one of these little ones to stumble.” –Luke 17:2

How much more so than one who never even gets the opportunity to believe in Him? Yahushua told us that even the children have messengers that watch over them:

“See that you do not despise one of these little ones, for I say to you that in the heavens their messengers always see the face of My Father who is in the heavens.” –MattithYahu/Matthew 18:10

Sadly America can be likened to the “Valley of the Slaughter”:

“Because they have forsaken Me and have profaned this place, and have burned incense in it to other mighty ones whom neither they, their fathers, nor the sovereigns of Yehuḏah have known, and they have filled this place with the blood of the innocents, and have built the high places of Baʽal, to burn their sons with fire for burnt offerings to Baʽal, which I did not command or speak, nor did it come into My heart. “Therefore see, the days are coming,” declares Yahuwah, “that this place shall no more be called Topheth or the Valley of the Son of Hinnom, but rather the Valley of Slaughter.” –YirmeYahu/Jeremiah 19:4-6

Thus the land has been defiled:

“And they slaughtered their sons And their daughters to demons, And they shed innocent blood, The blood of their sons and daughters, Whom they offered to the idols of Kena’an: and the land was defiled by blood.”-Tehillim/Psalm 106:37-38

Yahuwah despised and called it an abomination for a child to be offered as a sacrifice to Molech. Satan has always hated man and managed to trick them into murdering their children to the deity of fire. To this day, multiple millions of babies are still be sacrificed through abortion to Satan!

Sadly many women (not all) who are getting these abortions are doing so ignorantly! The Government has given woman an option and many of them see this alternative as the only way out. Planned Parenthood even uses these ads to convince teens to have abortions: 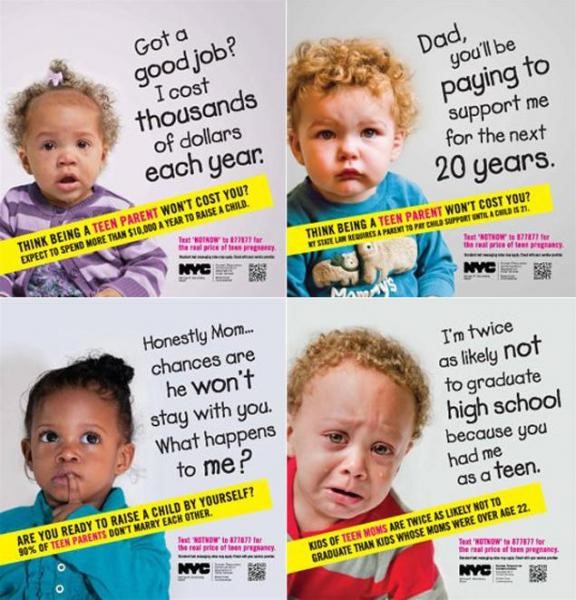 I truly believe the doctors that are performing these abortions known full well what they are doing and that is they are sacrificing these children to Satan.

Clearly, abortion is the deliberate destruction of a child in the womb. The act of shedding innocent blood is an abomination. This is a very evil reality that just breaks my heart! If I being human can be sadden over this, there is no doubt in my mind that Yahushua also weeps! These little ones are indeed His friends as we are also.