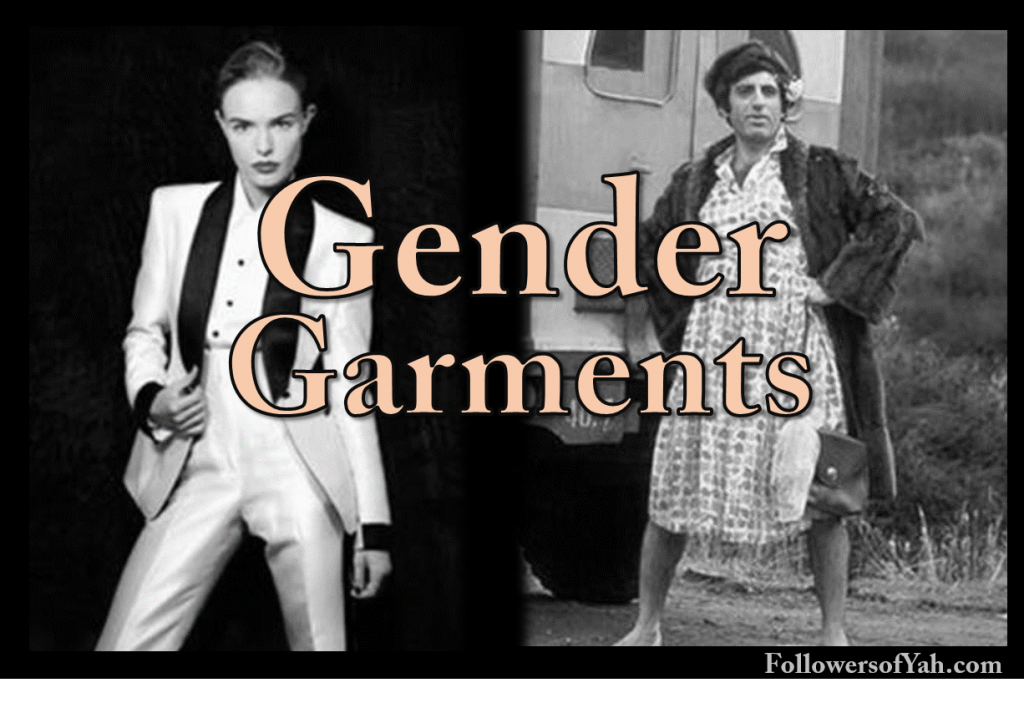 “A woman does not wear that which pertains to a man, nor does a man put on a woman’s garment, for whoever does this is an abomination to Yahuwah your Elohim.” -Debarim/Deuteronomy 22:5

Some claim that back in the Scriptural days everyone wore robes. If this was indeed the case, I’m sure the robes were distinguished one from another. Clearly in modern day society many homosexuals dress like the opposite sex. Yet they are not the only ones putting the other gender’s garments on. Since gender confusion runs amok this subject needs to be discussed.

On the surface it is quite obvious why men should not wear women’s clothing. Whereas women should not wear men’s clothing. Yahuwah is not the author of confusion whereas Satan is. Putting on different gender garments is confusion to say the least not to mention role playing! Yahuwah only created two genders, male and female. Each with different characteristics. Incomplete from each other yet whole together.

Wearing the opposite gender garments is much more than a man wearing a pink shirt or a woman wearing a black shirt. Those are just colors. The not wearing the other gender’s clothing is major. You see this verse is a two folded message. There is a spiritual and physical meaning to this one single verse. Yet both have the same commandment, do not put on the other gender garments. They both have the same underlying meaning. Here let me explain as we read the following verse:

This verse is very important in telling us what will not inherit the reign of Yahuwah. One thing listed separate from homosexual is effeminate. What actually does Effeminate mean?

“having or showing qualities that are considered more suited to women than to men : not manly” Webster’s

Clearly a man putting on woman’s clothes would make the man effeminate whereas a woman putting on man’s clothing would make her more masculine. This is quite obvious when looking at one’s outer garments. Without a doubt we are witnessing a major gender crisis that is occurring on a global scale. Part of the reason why we are witnessing this is because people are not wearing their proper garments. For us to get the larger picture in what Yahuwah is trying to tell us we must look at one’s under garments. Scriptures clearly tells us that,

“Before I formed you in the womb I knew you, and before you came out of the womb I did set you apart- I appointed you a prophet to nations.” (YirmeYahu/Jeremiah 1:5).

Each of us should zealously embrace, cherish, seek, live and wear our natural born gender garments! There should be no role playing between the different genders of putting on the other gender garments. A good example of this is King Ahab and his wife Jezebel.

Jezebel wore the pants in the family, meaning she took on the leadership role in the family whereas King Ahab took the more submissive role. They both wore the other gender garments. The outcome was disastrous. History clearly states how horrible the entire kingdom during that reigned turned out! An evil woman fueled by emotions totally destroyed lives by killing a vineyard owner named Naboth (1Kings chapter 21). She also tried to kill EliYahu the prophet (1Kings chapter 19).

The fact remains women are more emotional than men. Nothing wrong with being more emotional as that is what completes a man when the two come together! Yet men are more able to disconnect themselves from emotional situations. Take for instance, the story of King Solomon with the decision of the one baby and the two women. Let us review the situation:

“Then two women, whores, came to the sovereign, and stood before him.  And one woman said, “O my master, this woman and I dwell in the same house. And I gave birth while she was in the house.  “And it came to be, the third day after I had given birth, that this woman also gave birth. And we were together. There was no one else with us in the house, only the two of us in the house. “Then this woman’s son died in the night, because she lay on him. “And she rose up in the middle of the night and took my son from my side, while your female servant slept, and laid him in her bosom, and laid her dead child in my bosom.  “And I rose up in the morning to nurse my son and saw he was dead. But I looked at him closely in the morning, and saw he was not my son whom I had borne.” And the other woman said, “No! But the living one is my son, and the dead one is your son.” And the first woman said, “No! For the dead one is your son, and the living one is my son.” And they spoke before the sovereign.  And the sovereign said, “The one says, ‘This is my son, who lives, and your son is the dead one,’ while the other says, ‘No! For your son is the dead one, and my son is the living one.’ ”And the sovereign said, “Bring me a sword.” So they brought a sword before the sovereign.  And the sovereign said, “Divide the living child in two, and give half to one, and half to the other.” And the woman whose son was living spoke to the sovereign, for she was overcome with compassion for her son. And she said, “O my master, give her the living child, and by no means kill him!” But the other said, “Let him be neither mine nor yours, but divide him.” And the sovereign answered and said, “Give the first woman the living child, and by no means kill him – she is his mother.” And all Yisra’ĕl heard of the right- ruling which the sovereign had rendered. And they feared the sovereign, for they saw that the wisdom of Elohim was in him to do right-ruling.
-1 Kings 3:16-29

HalleluYah! Yes wisdom of Yahuwah was fully in him. Yet as a man wearing his gender garment King Solomon was not emotionally attached to the situation.  You see if a woman was in this horrible situation, which by no means am I stating that woman cannot be as we know the prophetess Deborah lead, but being her gender garment is nurturing, she probably would have taken the baby as her own!

Just as Moses was found in a basket first by a woman. What did she do? She took baby Moses in as her own child! She wore her gender garment and saved Moses’s live. If one of the guards would have found him, he would have been murdered! The guard is more able to emotionally pull himself out of the situation whereas the female was pulled in. There is no way a woman could ever utter words such as ‘cut the baby in half.’ Yet Solomon did in great wisdom.

Have you ever noticed how one woman could be telling a sad story to a few other woman and before too long they all are crying? This is not bad this is just how Yahuwah created the woman to be. And women need to embrace and cherish their gender garment. Likewise men need to theirs also. Because each are separate yet together are one! Actually, it is quite fascinating and all children of Yahuwah should zealously wear our gender garments! This is what separates us from the other sex. Enjoy your natural birth right. If we all did there would not be a gender crisis going on like we see today.

So us few and called out ones need to be happy for what our gender is. Embrace it as before we were formed in the belly, Yahuwah knew what would look best on us. Trust Him in that He knows who is more than capable of being the head of each household. Whereas also trust Him in that He knows who would be great mothers and helpers along with giving husbands encouragement to be the leader he was created to be!

Yet we also need to understand that wearing our natural gender garment does not have anything to do with how we learn spiritually. Actually there are many woman out there that are extremely knowledgeable, full of discernment having a deeper spiritual insight to growing in the faith. Remember part of her gender garment is to help. Therefore let her help. What a blessing to have her nurturing and bringing others into the Kingdom.

Clearly this world is suffering from a gender garment crisis which is leaving major havoc on the world scene. I hope that after reading this you will be encouraged to properly dress yourselves in the natural born gender garment that Yahuwah knows would fit you best, Physically and Spiritual.

One Response to Gender Garments